Host Your Voice FREE Giveaway for Mompreneurs and Social Entrepreneurs

What are most people likely to do in this situation?

You lose your mother when you are just beginning your career- just like that- after just having spent the evening with her. And then, and then you lose your husband just as suddenly on the third death anniversary of your mother.

You are finally coming out of it and moving on with your life and suddenly you are about to lose another person you have grown very close to.

There are many things people could do- but Amy Morin did something so beautiful that several million people have drawn strength from her!

When Amy knew she was going to lose her father-in-law who she had grown very close to after losing two very dear people already in quick succession- she decided to take solid steps to not cave mentally, and to stay strong in what she knew were trying times.

As a licensed clinical social worker, college psychology instructor and psychotherapist, Amy had a ton of experience helping several others deal with grief and depression. Drawing from her years of experience in the field, Amy started quickly jotting down things that a mentally strong person would do, in her situation – and ended up with a list of 13 things. Her article went live on LifeHack.org and the next thing she knew- it was going crazy viral! LifeHack had to request other contributors to stop submissions because of the traffic they were getting from her post.

It got picked up by Forbes and garnered millions of views over there, and then several other publications followed suit, too! And then, the rest was history. An agent talked her into fleshing out a book, which went on to become an instant bestseller.

While this was getting fired away in her life, Amy was still dedicating long hours to her psychotherapy practice and helping children in her role as a foster parent. And then she started getting the question from readers:

“How can I teach my kids to be mentally strong?”

Amy knew she had to help parent become mental strength coaches for their kids, and decided to do another book. 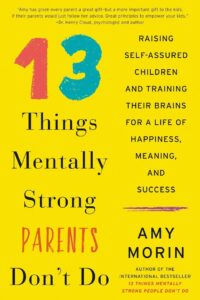 Says Amy, “While I could have written a book just for kids, I knew it was important for parents to be involved. They’re the ones who are there during those teachable moments and challenges. They have the ability to help kids build mental strength every day–if they know how to help them.”

When I contacted Amy Morin, I hardly expected a response to my request for an interview with her. After all, she had dizzying success and has incredibly busy days- she is a TED speaker, a best-selling author, a sought-after keynote speaker and writer. Imagine my pleasant surprise when she not only responded but agreed to do the interview immediately!

Here’s an excerpt from our interview:

“13 Things Mentally Strong Parents Don’t Do” is a wonderful book that touches upon parenting challenges. Do you think some of them are very specific to parenting in these times?

Today’s parents definitely face challenges that no other generation has faced. Your grandparents never had to ask themselves how much screen time should you allow your child to have? Or how might social media affect your child’s life? It’s clear that technology makes it a little more challenging to raise mentally strong kids. For example, kids use their screen time to prevent themselves from feeling uncomfortable emotions, like boredom or sadness. And while screen time could be a healthy coping skill when it’s used in moderation, for some kids, it’s the only skill they have.

I wanted to write a book that would help parents identify their core values so even the toughest parenting decisions would become a little easier. And I wanted to help parents tackle some of the unique challenges they’re experiencing in the modern world.

A lot of people have resonated with your suggestions, especially because you provide so many real-life examples. One thing that stood out for me from the book was the need to let children play without the supervision of adults. Can you elaborate a little bit more on that?

Most kids have busy schedules in today’s world. They run from one activity to the next with little time for free play.

But it’s important for kids to play with their friends without the activities being dictated by adults. When kids get to set the rules of their play, they learn skills, like problem-solving, conflict resolution, and other social skills.

Too often, adults intervene and take sides or tell kids they need to implement certain rules. And there are studies that show how that can breed a victim mentality in kids. They may assume they need grown-ups to do everything for them or to always make sure things are fair.

That’s not to say you shouldn’t supervise kids or step in when a child is being bullied. But it does mean it’s OK to take a step back and let kids resolve some of their differences on their own.

I think it is so interesting that you mention how parents transmit their insecurities and experiences to their kids. Some examples in your book – like the bullied parent transmitting her fears to her kids and the son of an absent father showering his kid with attention also illustrate that point. What do you think parents can do to get over the hangover of their own less-than-ideal experiences- not just for their kids but also for themselves?

It’s important to recognize how your upbringing affected you. As a child, you learned specific core beliefs about yourself, other people, and the world in general. Take some time to examine what beliefs might be inaccurate or which ones might not be serving you well.

For example, if you grew up believing you’re not very smart, it could affect your life and your parenting in several ways. Perhaps you don’t try for a promotion at the office. Or maybe, in an effort to prevent your child from ever feeling stupid, you correct her homework every night to make sure she gets perfect grades which in turn, means she never has an opportunity to learn from her own mistakes.

Self-awareness is the key to creating positive changes in your life–and in the life of your children.

You also make a great point about parenting with guilt. What strategies do you recommend for parents( especially women) to cope with multiple expectations in their various roles and not feed their guilt?

It’s important to recognize that guilty feelings don’t have to change your behavior. Buying more toys than your child needs, giving in because your child begs, or saying yes because you feel bad, isn’t healthy for you nor your child.

It can be helpful for parents to create a personal mantra. Reminding yourself of something like, “Just because I feel guilty doesn’t mean I did anything wrong,” or “I can handle feeling guilty because this is best for my child,” can be key to staying strong.

Do you have any suggestions on parents and children can work on some exercises together to strengthen themselves mentally on a daily or regular basis?

Building mental muscle involves managing your thoughts, regulating your emotions, and taking positive action. So it’s important for parents to work with kids on the skills that help them do those three things.

Each chapter is filled with exercises for parents as well as kids–from preschoolers to teens. Incorporating some of those exercises into your daily life can be instrumental in helping the whole family build mental strength.

One of my favorite exercises is called “Friend or Enemy.” When your child feels a certain emotion–whether it’s fear, anger, sadness, or disappointment–talk about whether that emotion is a friend or an enemy right now. So for example, if he’s angry because another child is being bullied at school, his anger may lead him to take positive action (like talking to the teacher). In that case, his anger would be a friend.

But, if he’s angry because he got a bad grade on his math homework, he might rip up his paper. In that case, his anger isn’t serving him well and it’d be considered an enemy and it’d be in his best interest to find a way to calm himself down.

That’s just one simple way to start teaching kids how to label their emotions and cope with their feelings in a healthy way.

I never set out to make 13 my magic number. My original list of 13 Things Mentally Strong People Don’t Do was a letter to myself during one of the toughest times in my life. I published that list online thinking it might help someone else. I never imagined 50 million people would read the article or that I’d write several books about it in the coming years. So I guess you could say 13 has turned into my magic number!

How do you do your research for a book?

My research often takes place over the course of a few years. I teach psychology classes at Northeastern University so I come in contact with the latest studies all the time. When I find a study that sounds interesting, I bookmark it.

I also write a lot of articles for various media outlets. I find that writing short articles also prompts me to do a fair amount of research and I bookmark with the studies I find interesting.

And the stories in my book usually things that happened in my therapy office or with my foster children. Occasionally, I’ll hear about a famous person or historical figure that would make a good anecdote as well.

How do you divide your time between your practice, your public appearances, your family, foster parenting and writing?

Most of my time right now is spent speaking and writing. I travel a fair amount so I took a sabbatical from my work as a psychotherapist. I also took a break from foster parenting because I’m not home enough to give foster kids the attention they need. I feel like writing, teaching, and speaking is where most of my energy needs to go right now.

What do you have for your millions of readers in the future?

I just started working on my third book. We haven’t released the title yet, but I can say I’m really excited about it! I’m looking forward to sharing more information with my readers soon.