As an adoptive parent, we end up talking to others about adoption almost on a regular basis.  It is our choice to open up and share, in the hope that other families will benefit from our mistakes and successes.  The one question that has been harder to answer was what is different about adopting an older child. As parents who adopted a child younger than 1 year of age, we have been learning in the past decade.

Last week, I got to listen to Sandeep Thomas as part of a sharing session organized by the Karnataka State Council for Child Welfare, a 60-year-old NGO founded by Lady Lokasundari Raman, C V Raman’s wife.  Sandeep was 5 years old when he was placed in the pool of children to be adopted and 6 years old when he reached his adoptive parents in the US.

He speaks eloquently and honestly of his struggles – his anger, rebellion and difficulty forming relationships as a result of the trauma he had experienced in his life pre-adoption.  Adoption is a beautiful process of forming one’s family. It also comes with its challenges that are easier to handle when adoptive parents are prepared and ready.

So what should one know about adopting older children and bringing them home forever?? As an adoptive parent myself, I think of the following as the ‘stages’ of acceptance on both sides.

Parents turn to adoption to build a family.  A lot of the material out there on adoption talks of babies born from the heart emotively.  That is true, it is a fantastic, intense experience on par with little else. However, adoption starts with loss and grief born from that loss of a biological connection.  A parent, focusing on building a family and the future, may not even want to hear the hard stuff. The harder parts of adoption, unfortunately, don’t go away because we want that to be true.

The Adoption Triad needs to be acknowledged – the fact that the birth mother and father aren’t physically there does not mean that they are not a part of the adoption.  Children think about them, wonder where they are from. Older children are likely to remember specifics, a fact that can impact their future, their relationships with friends and family, etc.

Learning ‘Adoption’: It is about giving both sides a complete family

We now have enough voices talking from all parts of the triad.  Various adopted adults are speaking up. Biological parents have access to support, even if stigma is still very real. Adoptive parents are more vocal, with support groups et al.  As a new adoptive parent, these voices are critical and welcome. They help us learn what doesn’t work and lead us to try things that others think works.

We learn that a primal wound gets created in the child when they deal with the trauma of separation/care that isn’t optimal.  We learn positive adoption language and stop using terms like ‘real parent’, ‘own child’, etc. We get that adoption starts with placement and is a journey that unfolds, in part influenced by factors we never controlled.  Our response to these circumstances is also learned.

Learning the new significance of ‘Attachment’

Attachment is a technical concept, more complex than the casual sense in which we use it in everyday English.  A child attaches to his/her parents in the first year of life. It starts with his/her needs being met when required – fed, kept clean, held and spoken to, all of which give the child a feeling of safety and comfort.  In the next year of life, they develop a sense of their boundaries, often by testing them. This is how child development looks for children growing up with caring parents.

Adoption breaks this cycle when children are, for factors beyond their control, placed with parents different from the ones who gave birth to them.  The child, who has been used to a certain environment, has been taken away from there and has been in an institution for a certain period of time.

Then they are adopted to come to a new home, strangers who are now their parents, new friends, sometimes a different language – many changes in the matter of their beginning years.  Most of it sudden, sometimes without any preparation. It isn’t hard to see that a child might need time to attach to his new parents and surroundings.

Adoptive parents would be better off if they read about attachment from credible sources and understand that adoption comes with happiness and sadness.

It isn’t personal, adoption is very much the solution to a larger problem because a family is the best place for a child. But it is not as simple as bringing a child home and moving on with life.  It will take time for the child to attach and feel comfortable. Parents might not always get a super-excited response to even happy surprises – the older child, depending on their personality, might be guarded in their responses.

This is normal: parents who are secure and patient will see a higher level of attachment with time.

All children need time.  The adopted child needs it more. The older adopted child, even more! This can be a challenge for parents who adopt. Those who have the luxury of taking a long maternity/paternity break are able to give children more time.  Single parents do find this more of a struggle.

Double career households are a norm these days.  So how does everyone get what they need? Here are a few practical suggestions:

Know your policies- Ask for Help!

When a couple knows that they are applying to adopt (or even before, since this is the right thing to do), they could start by petitioning their organization to develop an adoption leave policy.  That gives them time to plan to the extent possible. After working with several couples, it has been my experience that when a cogent, evidence-driven case is put together, many companies have added to their HR policies to become adoptive parent-friendly.  If you think about it, it makes them more attractive to an employee looking for stability, this is win-win for all sides.

To know about the new leave policy on adoption, see here.

Up your ‘Readiness’ factor

Planning as much as possible on the work front on transitions, keeping key colleagues informed of your responsibilities will become critical.  Often, a child is identified (in the current, insensitive term ‘reserved’!!!) and assigned within 48 hours. A week or 10 days later, the child might be in a domestic home, placed in a pre-adoptive foster-care agreement.  Still not legal parents but parents in all other ways – physically, mentally and emotionally!

Caring for the child between the mother and father (in case of a couple) or by the father/mother in the case of single parents is a great idea.  Getting help for all other tasks is great – the cooking, cleaning, et al but it is a good idea for parents to do all tasks related specifically to the child.  The bathing, putting on lotion, dressing, playing, etc. because this is how attachment is built, how we get to know the child and how the child begins to open up with us.

For whatever time we have as adoption leave, this is a great way to spend time with the child.

Setting up systems that will be caring and sensitive is very important.  Not for this child, a maid hired a couple of days before a parent starts work.  It would be a good idea to have the caregiver interact jointly with you, the parent and do a slower transition.

The need for time continues in many areas:  any developmental milestones (within reasonable limits) or learning a new language.

It is also a good idea to have certain tasks/times as only parent-child times like reading a book at night or an evening bath or the evening meal or a mandatory cuddle before bed with a recap of the day’s events.  Any amount of time may fall short, and honestly, it is hard to substitute quantity of time. Making memories, setting up consistent rituals is a good practice to actively be present for our kids. With time, many hard questions get asked when these foundations have been established.

Adoption isn’t charity.  It is parenting. Given that, there is really no reason that kids with adoption in their backgrounds can’t do well.

I say this with a lot of responsibility: it is important to keep expectations high.  This doesn’t mean pushing on marks or even careers. It is keeping the expectation clear that this child of ours, will like other kids of ours and others, will need to get independent and accomplished to the levels they choose.  To empower them to go out and conquer – their fears first and then external obstacles. 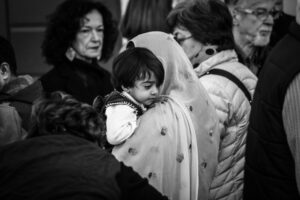 “An older child has internalized their name and it is a part of their identity.  When so much around them is changing, the name could be an anchor that stabilizes.”

Adoption isn’t a crutch.  Sure, these kids of ours started out with some significant trauma.  And that has its effects in different ways – behavior, learning, etc.  Helping our children find their areas of interest is critical and then helping them aim high enough for themselves is critical.  Good parenting goals to have.

Identify with their identity

Many parents change their child’s name as part of the adoption.  An older child has internalized their name and it is a part of their identity.  When so much around them is changing, the name could be an anchor that stabilizes.  It is also natural for adoptive parents to want to start a new future with their child, the name they give symbolizing this.  A happy compromise could be using the name the child came with as a middle name to both acknowledge their past and the new start to a future.

Meet them halfway wherever possible

The same could be said of the child’s language.  In India today, a child from Orissa might be placed with a family in Telangana.  For a child whose voice has barely been heard (literally and figuratively), the new family might also come with a brand new vocabulary.  Imagine being a child who is sometimes just connecting the concept to a word and then the entire connection is cut!

It would be a great idea for parents to begin to learn the child’s language in return.  Learning Telegu might be the best way for the child to integrate into his/her new family, communicate with grandparents and the wider family, et al.  How great would it be for parents to try and learn at least basic vocabulary of the child’s language for the initial days! Not only would it give the little one some comfort (and giggles correcting their mistakes) but also a tiny idea of the huge task we’re setting for our child.

India’s diversity is a huge strength and another language added to our arsenal can only be positive.

Jody Landers said it just right with “A child born to another woman calls me Mom.  The depth of the tragedy and the magnitude of the privilege are not lost on me.”

Sangita Krishnamurthy is a special educator who works with children on the autism spectrum, children with ADHD and learning difficulties. Her experience with and reading on adoption inform her as a practitioner. She blogs at Life and Times in Bangalore.

Joanna Clark: The Woman Leading The Sleep Revolution For Families

The Power Of Children’s Picture Books About Diversity.