Women At Work: How One Company Shows Its Commitment To The Diversity Promise! 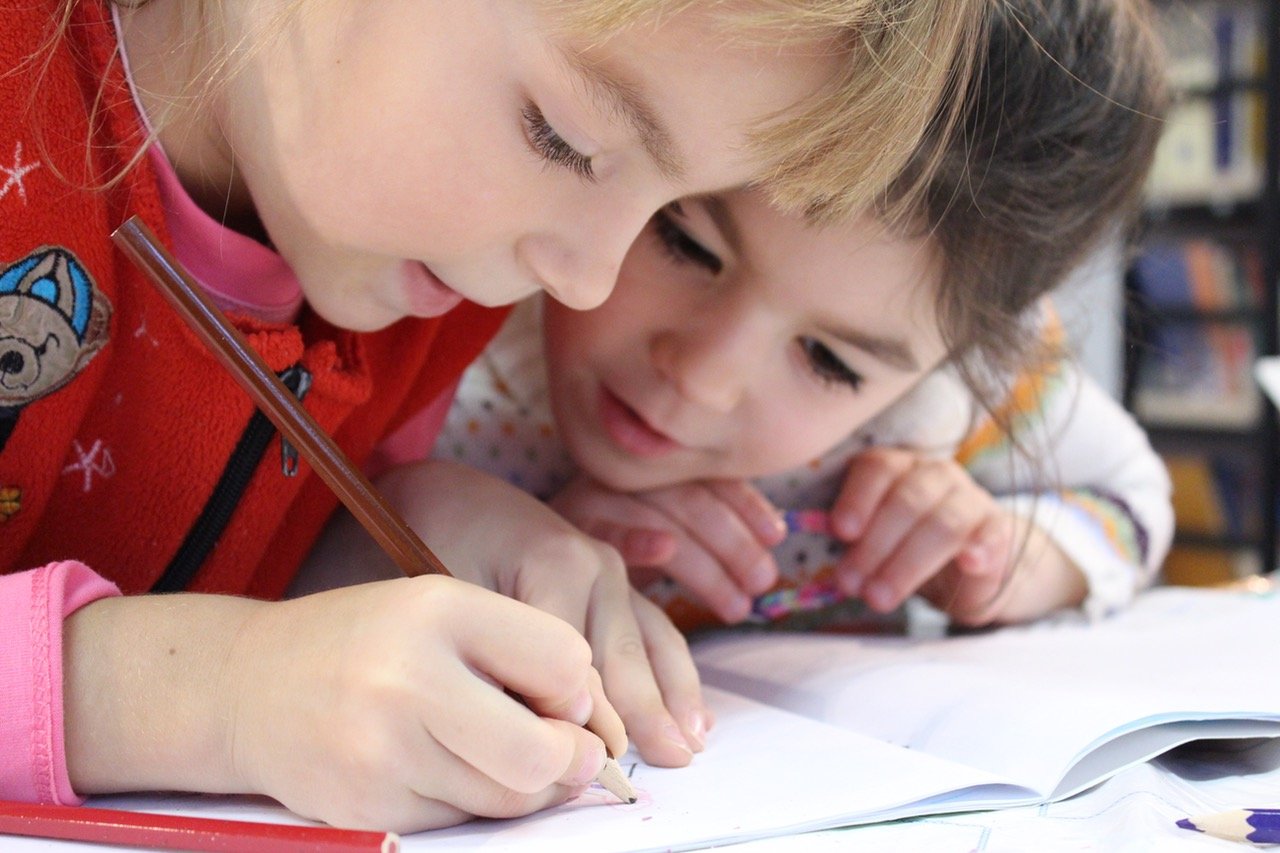 It’s a phrase well-meaning parents everywhere say to their children. I sometimes hear it fall from my own mouth, and wonder where it came from as I don’t intentionally use it. With intention, I’d address the problem specifically, and offer more guidance in making it better without blindly suggesting to my child that he isn’t nice. Although I have many problems with the phrase “be nice”, my main one is that the actual message often has nothing to do with being nice at all.

Recently at a playground, I saw a little girl sitting in a sandbox completely immersed in scooping pebbles into a bucket. A boy her same age starting pulling at the shovel she was using. The mother of the girl said, “Honey, he wants a turn with the shovel. Why don’t you share it? Go ahead, be nice.”

Was giving up her shovel and forgoing her project really the nice thing to do? Perhaps we confuse being nice with pleasing others at the expense of ourselves? Are we teaching our children this is virtuous? Avoiding conflict isn’t more important than asserting ourselves, yet that’s often the message behind “be nice”. Self-denial then becomes the nice thing to do, and rather than follow our hearts we let the expectations of others guide us. In this way, we fall out of alignment with ourselves. We forget how to honor ourselves because we are so preoccupied with external validation.

Read More: What Are We Subconsciously Teaching Our Kids?

Personally, I never wanted to be defined as nice. It’s a good start, but it’s not enough. People get called “nice” when they’re pleasant, but lack a certain oomph that makes them stand out. “Nice” people are kind, but something stands in the way of knowing them on a deeper level. That something is usually niceness itself, as truth is often sacrificed in order to appease and be non-confrontational. When we tell our children to be nice, we unintentionally interfere with their relationship with themselves and others.

Authenticity is niceness in its highest form. It’s honest, and that’s what all people want and deserve. It’s also what we owe ourselves. Let’s not unknowingly lead our children to believe otherwise through the confusing message of “be nice”. The lesson that little girl really needed is how to say, “I’m enjoying my shovel right now, but when I’m through, you can use it. ” It teaches her to assert herself while still speaking calmly. It also helps the boy develop respect of people’s time, space, and belongings. It reduces entitlement and fosters mutual respect. 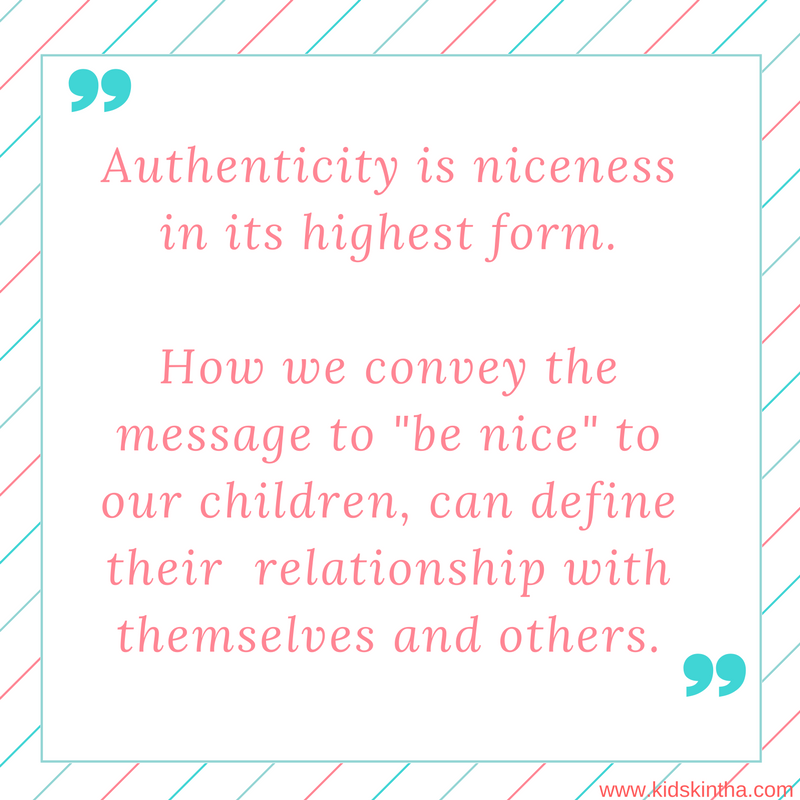 Below are 11 things to do instead of saying “Be nice”:

1.) Be specific.  “Be nice” is too vague.  Telling children the baby likes to be touched gently and the dog likes to be pet slowly is more helpful. Dr. Deborah Miller of Nemours says an important part of giving directions is to use clear action words. She says, “Use ‘Sit here quietly and wait, please’ instead of ‘Be good.'”

2.) Ask questions to evoke reflection and self-correction. When it’s not so easy to give specific directions, it might be appropriate to say, “Is what you’re saying (or doing) helpful or hurtful?”

2.) Be Non-Judgmental. Assume your child is always nice. When he or she needs more guidance, correct their behavior, not their character.

4.) Validate feelings. Allow children to say how they feel, even if it’s not what you want to hear. My 4-year-old sometimes says, “I hate my baby brother!” Rather than telling him not to say that, I simply say, “It’s hard to have a brother sometimes, isn’t it?” Dr. Jeffery Bernstein, a psychologist and relationship expert says, “Validating the feelings of your children helps them to feel understood. To help your child feel understood, it means you keeping your ego and desire to lecture in check. Validating your child’s feelings also means that you don’t judge him or her. Instead, you simply acknowledge his or her feelings. This takes focus and discipline as parents. As I share with my clients, the best discipline you can give your child is having the self-discipline to be patient, empathetic, and loving—especially when he or she is not acting lovable.”

5.) Have rules. Mirjam Schoning, vice president of the LEGO foundation,in her article Children in Charge, talks about a Swiss school, Villa Monte, that has no teachers, exams, or report cards. They believe in non-interference with children’s self-driven learning process and minimize praise and criticism. They follow only one rule which is, “You should not do anything to other children that they do not like.” Such a rule lets children know what it means to “be nice”, which is primarily to respect the boundaries of others.

6.) Communicate and compromise. Last night, my son wanted me to play tag with him. I told him I felt tired and wanted to relax which upset him. I said, “You really want me to play tag, and I really want to sit down. What can we do to both be happy?” He said, “I know! You can walk instead of run or we can set the timer for just two minutes.” We agreed on playing for two minutes, which honored both of our feelings. Neither of us was forced to sacrifice ourselves for the other.

7.) Teach boundaries. Dr. Shefali Tsabary, clinical psychologist and author of The Awakened Family says, “What I see as the core problem with the message, “be nice” is this: a lack of appreciation for the sacred power of boundaries.” Teach the power of boundaries by having them yourself. Say, “No, you may not play with my make-up.” “No, you may not jump on me.” “No, you may not hit.” Also, respect their boundaries. If my child doesn’t want a kiss, I don’t force it. If he doesn’t want to share his new toy, I don’t make him. (If he doesn’t want to brush his teeth, that’s another story. However, through honest communication, he generally understands the non-negotiable stuff.) Children should know having boundaries isn’t mean, but necessary.

8.) Give them tools to cope. When my 4-year-old gets frustrated he often yells, throws things, and stomps around. I’ve been teaching him to count to ten, take deep breaths, and ask for help. Of course, in order to solidify these behaviors, I must model them.

Read More: Why Saying “Thank You” Is Much More Than Just Good Manners

9.) Teach empathy. There are many ways to teach kindness without insisting they “be nice”. We often talk about how different people feel in given situations. Before we go to playgrounds we talk about how someone would feel if they were left out of a game. Before going to someone’s house for a play date we talk about how hard it can be when other people come over and play with all our toys. When we mention this Javin usually wants to bring one of his toys to the friend he’s visiting to make sharing easier. 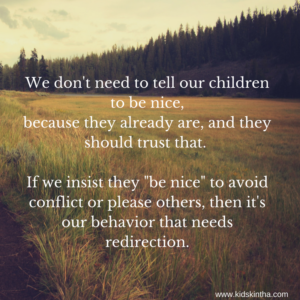 10.) Model compassion. The other day we were walking around the lake at our local park. There was a homeless man sitting on a bench, and I immediately thought of all the bananas I had in my backpack that would most likely not get eaten, but bumped and bruised, and sworn off forever. I offered one to the man. Javin was uncomfortable and confused by this exchange. I explained to him how some people don’t have a home, or enough food because they don’t have much money. This realization made him sad, but I told him that we can always do our best to help. He said, “Let’s go to the store to get more bananas to give out!”

11.) Let them know they won’t always be liked by everyone, and that’s okay. I wish I accepted this a long time ago- it’s so freeing! Dr. Shefali Tsabary says, “If nice is in the way of authentic, it’s not a true relationship.”

We don’t need to tell our children to be nice, because they already are, and they should trust that. If their behavior needs redirection or they’re lacking consideration, they need more specific guidance. If we insist they “be nice” to avoid conflict or please others, then it’s our behavior that needs redirection.

Although I trust my children will be kind and generous, these qualities don’t come from denial of their true feelings. Good-doing comes when we are aligned with ourselves and act from our heart- not out of fear of judgment or rejection.